​Click here for Part 1
Summary
Phase 2 of the Mecha's boss fight. The weapon has been switched to dual fists and the Mecha is faster and more aggressive.

Goals:
This page has a lot more notes on design and animation theory rather than technical breakdowns.
Video
Choose your weapon!
This part is more about game design than animation, but I figured it might still be interesting.

The first thing I had to decide was the combat style of the Mecha's 2nd phase. I started by writing down some ideas for this phase, which helped make my decisions:
An AI's weapon plays a big part in the combat cadence, so I decided to start there. I came up with 2 configurations for the Mecha's glaive - either a single giant gauntlet or two paired gauntlets. 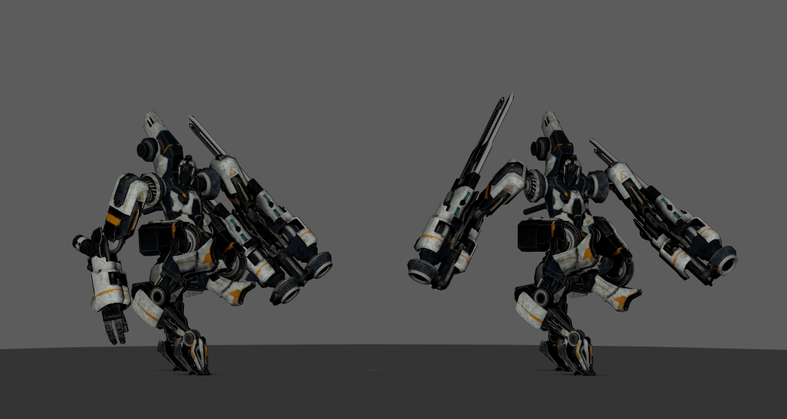 These poses were not meant to be final but they started to imply the Mecha's improved agility already.
​
I wrote down some notes about the different configurations to help decide which weapon to use.

1 giant gauntlet Dual gauntlets
Ultimately, I decided that since the Mecha is slow and lazy in the 1st phase, the 2nd phase should have the Mecha be more agile and sharper in its movement. The dual gauntlets provided a better opportunity for that since it's better balanced, and it also has a better contrast in silhouette since it now holds two weapons instead of a single one.
​
Same personality, different mood
The 2nd phase was a good time to show a shift in the Mecha's mood. This doesn't mean that his personality changes, but rather his attitude to how he's approaching the fight. These were some of the things I thought about when doing the 2nd phase:
These notes gave me some general guidelines to how the Mecha would approach the fight. Unlike the 1st phase, his combat actions should be focused and less unnecessarily flashy. There can be dedicated taunt actions as a more direct disrespect. He will move faster and attack more frequently, and will actively try to chase you down or otherwise get in range to attack.

Usually I start an animation set with the idle pose, but for this I started by making a sprint animation for the Mecha, which helped me understand the cadence and tone of the 2nd phase.

The aggressive sprint was useful to pin down the Mecha's new attitude towards the fight.

The idle is a good place to really differentiate between the 1st and 2nd phases. Whereas in the 1st phase, the Mecha's idle was very open and still, in the 2nd phase his idle is much more energetic, and he is in a defensive stance, which shows his more serious attitude to the fight while still retaining his confident and playful personality.

The movement and posture is obviously inspired by real life fighters.

His attacks are generally more direct in this phase. Also, fun fact: this specific attack is a homage to Terry's Power Dunk from Fatal Fury.
​
Think fast!
For the 2nd phase, I created a new system for its AI that allows it to react to events dynamically in the middle of performing other actions.

It is analogous to a player deciding whether to continue an attack combo or not depending on what's going on in gameplay, and uses a similar system, and the setup is actually based on the player Blueprint's version of the input buffer in the form of a notify I can place in any animation. 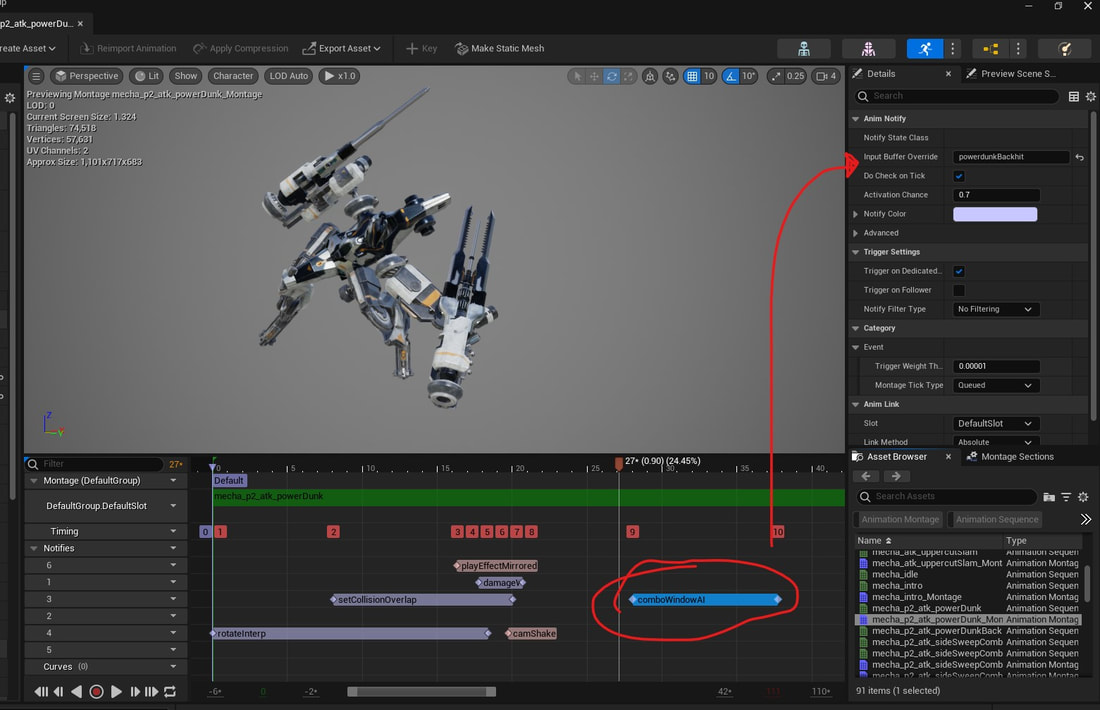 I wanted the Mecha to feel intelligent enough to react to the gameplay events so for every such one of the reaction notifies that I place, I thought about what conditions the Mecha would want to react to. For example, for the attack above, it's very possible that the player will dodge behind the Mecha since the Mecha jumps into the air and travels quite far forward. So in the window of where after the Mecha hits the ground, the notify allows the Mecha to check if the player is/gets behind him. If so, he reacts with a punch behind himself to try and catch the player.

In the same way, each notify instance in the various animations that the Mecha has has unique conditions associated with them to allow the Mecha to react dynamically to the gameplay. 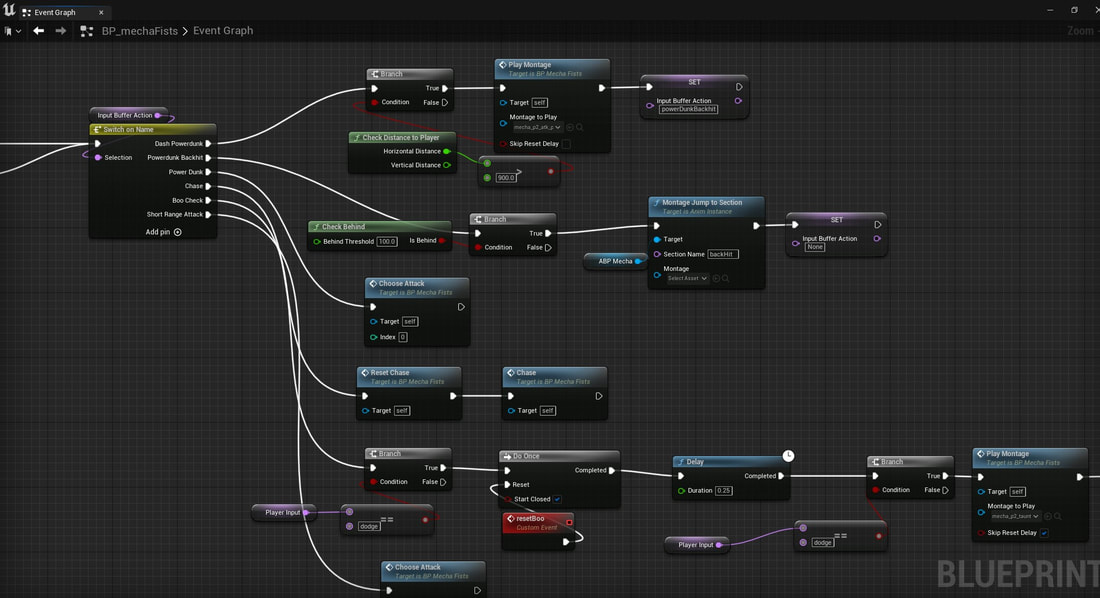 Conditions for various reaction windows for the Mecha.
​
This was the system used for the Mecha's feint/taunt. An AI reacting to not just your attacks but also your behaviour really helps to make it feel alive, so I wanted the Mecha to perform a special reaction if the player fell for his feint. In this case, falling for his feint means that the player tried to dodge a nonexistent attack, so all I had to do was have a window of time during his feint where the Mecha would wait to see if the player dodges.

Side note: the player BP broadcasts all inputs to any actor in the vicinity. While I only have a couple use cases for the Mecha for this, being able to broadcast inputs and events allows AIs to have unique reactions to any player inputs such as dodging, attacking, jumping, etc. It can also be used for AIs to send information between each other and to the player for contextual actions. The first prototype version of this system was developed in my previous "Swordbunny" sidescroller project. 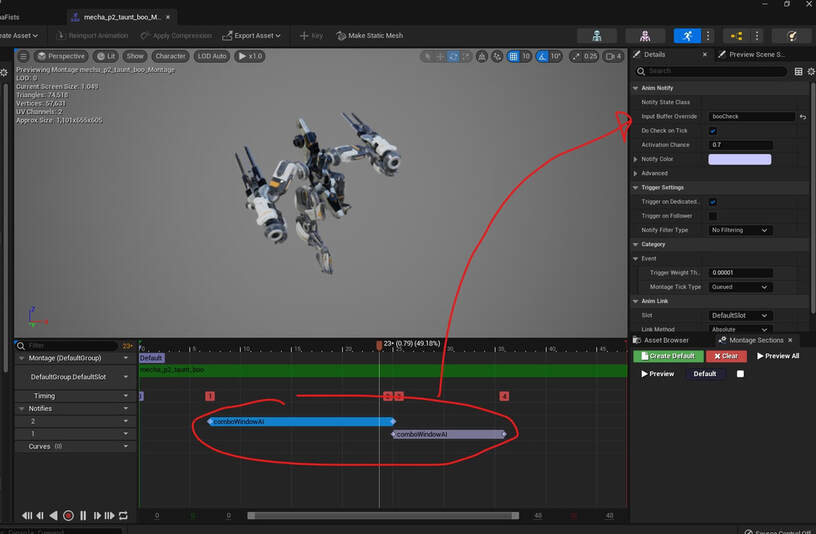 The notifies for checking if the player dodges during the Mecha's feint animation.
​

The Mecha reacting to the player's actions really helps him to feel alive and aware of the player, and is also a great way to show his cocky personality.
​
As I wanted to make the Mecha more agile in this phase, he is capable of dodging away and around the player reactively. Of course, this doesn't happen every time you attack him or it would be impossible to land a hit, but it creates a great contrast from the 1st phase and makes him feel aware of the player's actions.

Again, this uses the reactive notify system I described above for the Mecha to decide whether to dodge or not in response to the player's actions.

Mirror, mirror, on the wall
Another new ability of the Mecha is the ability to mirror his stance and by extension, all his attacks and movement. While it mostly doesn't affect the combat, this adds another layer of nuance to his behaviour. However, it does greatly affect any animation where the root motion has a lot of sideways movement such as when the Mecha dashes around the player or attacks sideways.

The Mecha is able to switch his stance while standing still or moving, and attacks are also mirrored.
​

Attacks with a lot of side movement especially benefit from the mirroring. 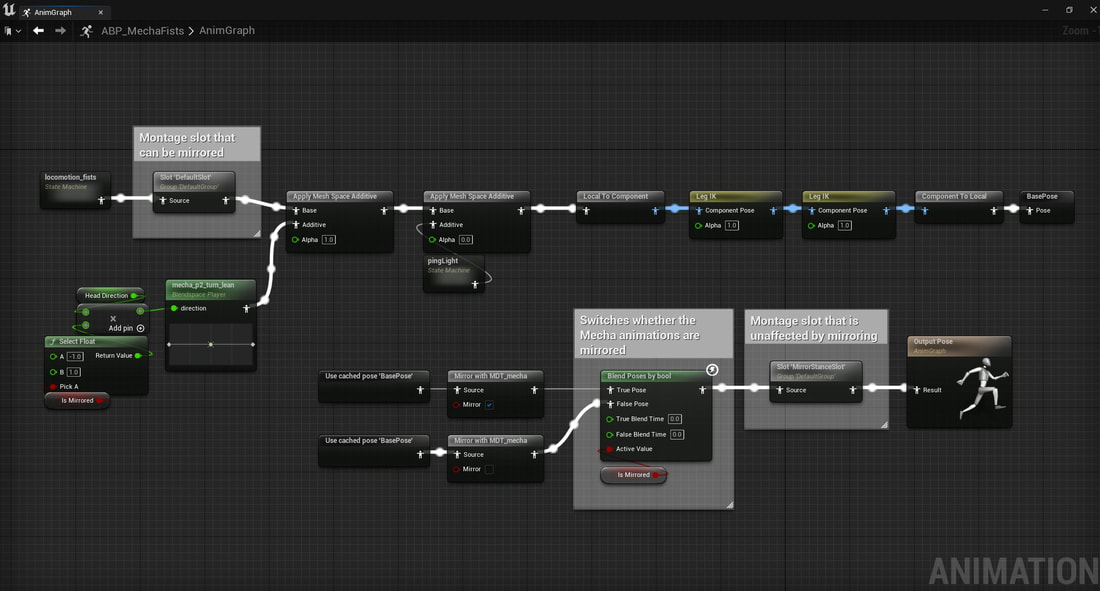 There were two reasons to do it this way:
Another interesting thing to note is that notifies cannot be mirrored either. I had to create custom FX notifies to be able to mirror any FX for the Mecha properly, which wasn't really difficult. 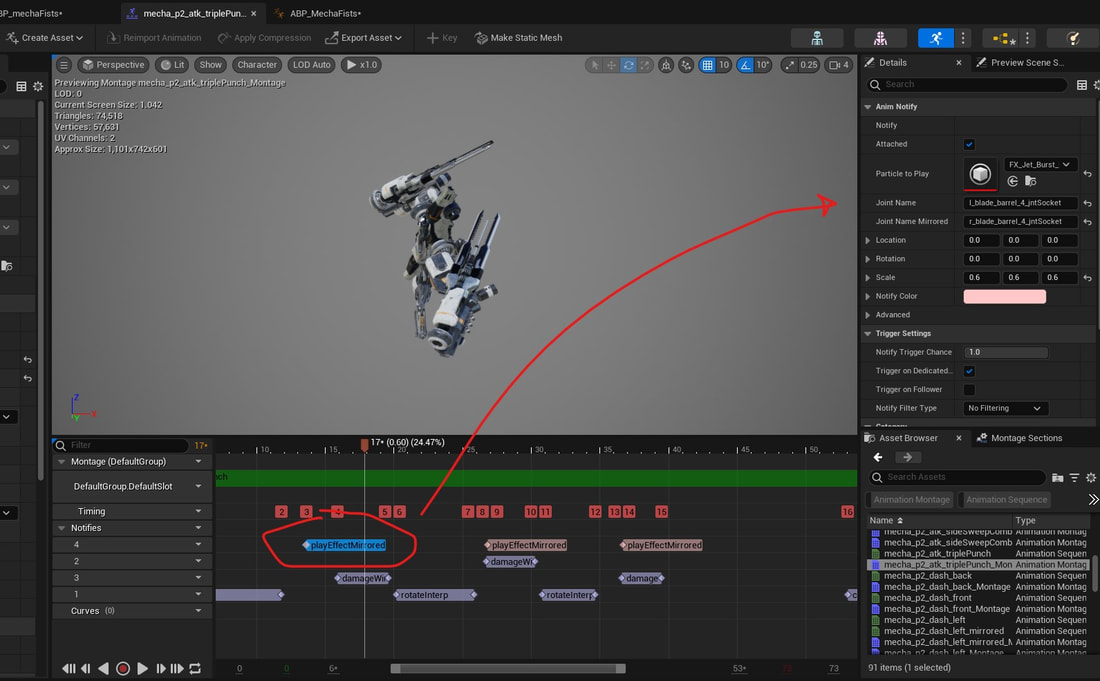 Overall, the new mirror system in UE5 is really cool, but there's still some issues I would prefer to be resolved before trying to use it extensively.
​Click here for Part 1